The violent events that transpired on January 6, 2021, in Washington, DC, shocked our nation and the world. The example of an angry mob, incited by President Trump and others, attacking law enforcement officers charged with keeping order, breaking and entering the Capitol illegally, and taunting reporters, is now seared into our memory. This was action worthy of tyranny, not democracy. It was a brand of loyalty to the President’s lies and deceit devoid of any legitimacy as “patriotism.” It must also be said that such actions reflect the deep divisions in our nation that have left many feeling wronged and vulnerable to take matters into their own hands, though this does not legitimate such a response given the utter disregard they express to the tenets of a democratic society. The effect we witnessed in the reckless violence that erupted that day remains a blight on the values declared in our nation’s Constitution and embodied in the principles of our democracy.

No one of good conscience, regardless of party, can stand silent in the midst of an assault of this magnitude, and we as members of the faculty of the Watershed School join in voicing our refusal to turn from our responsibility to speak. Our school was founded on principles that reflect a different path than what we witnessed yesterday: a basic respect for difference; a desire to understand others whose views differ from our own; the conviction that citizenship is a common responsibility and “requires practice”; and, the commitment to help our students develop “skills leading to effective citizenship and leadership” for the sake of our diverse and pluralistic society.

We believe that democracy can only thrive in the midst of a community shaped by vigorous and respectful debate, and affirm that this depends upon a fundamental respect toward those with whom we differ. We hold that the work of leadership, at the local, state, and national level, must support and sustain the flourishing of all our citizens, above all those who are most vulnerable among us and whose fundamental rights are endangered. Anything less than this cannot be branded as patriotic, regardless of its intent. The violence we witnessed on January 6 can only be understood as a threat to democracy, based as it is on free and fair elections—as courts in at least five states ratified to have been the case—and on the peaceful transfer of power, as ratified by the overwhelming majority of our elected legislators in the US House of Representatives and the US Senate during the early hours of January 7.

While the actions of an angry mob were shocking, their lawless actions should not have come as a surprise given the President’s persistent and baseless accusations of fraud over the last two months. And let there be no mistake about it: President Trump’s speech on the morning of January 6, within view of the White House, in which he repeated his irresponsible attacks and fanned the crowd’s anger with incendiary rhetoric, was in some measure responsible for inciting the violence that followed. His words and their actions can only be condemned as nothing less than an attack on the heart of our democracy—and every democracy. We join others from both political parties in condemning the events of this day and all those, leading and following, who brought this tragedy upon us. In the wake of this assault, we commit ourselves to the ongoing work of cultivating values of justice and fairness essential to our nation’s life and to the flourishing of all its citizens. 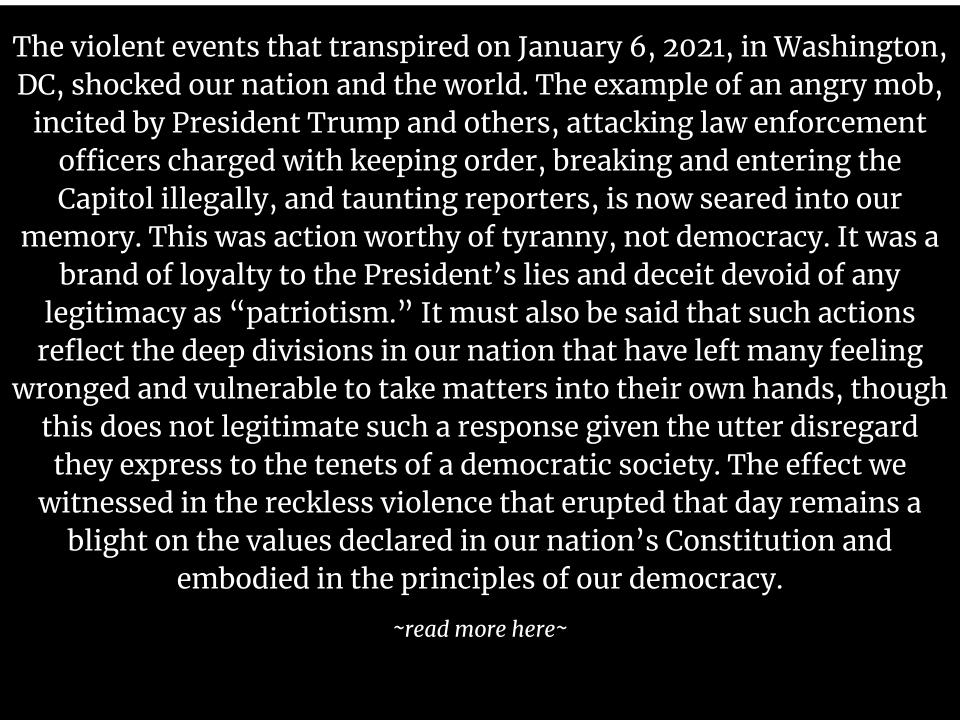