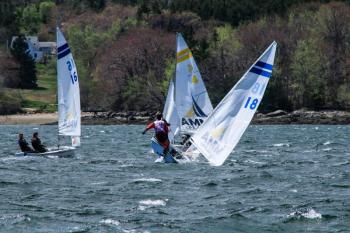 CASTINE — The Rockland Community High School Sailing team has come a long way in the last six years, and the team's successes reached new heights last weekend with a third-place overall finish at the Downeast Championships. The Rockland team edged out Maine rival Yarmouth, who finished fourth, to be the top Maine team in the regatta.
The Downeast Championship is hosted by Maine Maritime Academy and is Maine's oldest high school sailing regatta. It attracts the toughest competition of any Maine event, drawing powerhouse teams such as Tabor Academy and Marblehead High School. The pace set by the competition is very unforgiving, as the Rockland team has learned over the years. This year's third place finish caps a steady progression up the ranks for the team.
Senior skipper Jesse Dunn, who lead the team in the A division with crews Andy Bird and Hallie McDougall, had a personal best performance in his fourth and final Downeast regatta. Dunn was relentless on the racecourse, catching boats from behind all weekend, and too fast to catch when ahead at the start. Dunn also made a crucial decision to take penalty turns for a questionable foul in the third race, something not often seen at the high school level. Dunn and Bird lost three boats while taking their turns, then picked up two of those boats on the next leg.
Junior skipper Peter Galloway and crew Elliot Spear also had a strong showing, and claimed fourth place in the B division. Consistency was the name of the game, and Galloway and Spear never finished below eighth place, despite being over the start line early on two occasions, and having to backtrack to start behind the entire fleet. The pair came roaring back from seventeenth to fifth place in one of these races.
Also sailing for Rockland were Jillian Galloway, Warren Galloway, Claudia Fox, and Hannah Chase. A second Rockland team finished in ninth place out of 17 teams.
The High School Sailing program hosts teams from the Midcoast area in the spring and fall and is open to students from seventh to 12th grade. Located at 655 Main Street in Rockland's North End, The Apprenticeshop is a school for traditional boatbuilding, sailing and seamanship. Community Sailing, which offers sailing from March through October for all area youth and adults, is now enrolling for spring after school sailing, spring adult sailing, and the summer season. Youth and adult summer sailing begins June 22. Scholarships are available. FMI: 207-594-1800 or online at apprenticeshop.org.